Implementation of the recommendations of the Seventh Central Pay Commission. — Dress Allowance

Government of India
Ministry of Finance
Department of Expenditure

Subject: – Implementation of the recommendations of the Seventh Central Pay Commission. — Dress Allowance. 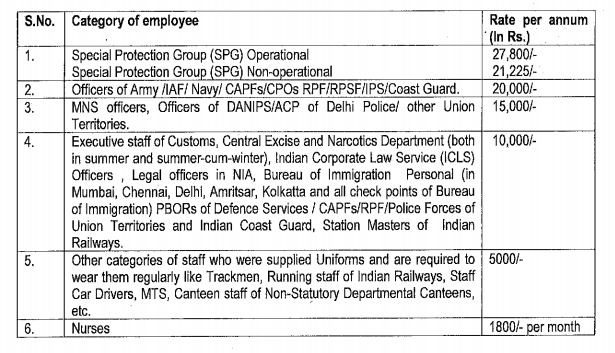 2. Allowances related to maintenance, washing of Uniform are subsumed in. Dress Allowance and will not be payable separately.

3. Further categories of staff who were earlier being provided Uniforms, will henceforth not be provided with Uniforms.

4 The amount of Dress Allowance shall be credited to the salary of employees directly once a year in the month of July.

5. This allowance covers only the basic uniform of the employees. Any special clothing like that provided at Siachen Glacier or inside submarine or fluorescent clothing provided to Trackmen or Indian Railways or to lB personnel posted at high altitudes will continue to be provided by the concerned Ministry as per existing norms.

6. Outfit Allowance, paid to Indian Foreign Service officers and employees will continue to be provided as before, is enhanced by 50%.

10. In so far as the persons serving in the Indian Audit & Accounts Department are concerned, these orders issue in consultation with the comptroller & Auditor General Of India.

(Annie George Mathew)
Joint secretary to the Government Of India.