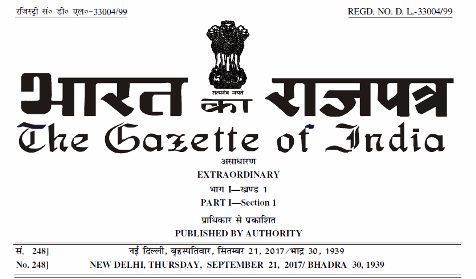 No. F. 6/2016-SCA(I).—The Seventh Central Pay Commission (Commission) was set up by the Government of India vide Resolution No.1/1/2013-E.III (A), dated the 28th February, 2014. The Terms of Reference of the Commission also includes the Officers and Employees of the Supreme Court. The period for submission of report by the Commission was extended up to 31st December, 2015 vide Resolution No.1/1/2013-E.III(A), dated the 8th September, 2015. The Commission, on 19th November, 2015, submitted its Report on the matters covered in its Terms of Reference as specified in the aforesaid Resolution dated the 28th February, 2014.

2. The Government, vide Para 7 of the Resolution No.1-2/2016-IC, dated 25th July, 2016, decided to refer the allowances (except Dearness Allowance) to the Committee on Allowances (the Committee). As the recommendations on Allowances (except Dearness Allowance) were referred by the Government to the Committee, the Chief Justice of India vide Para 7 of the Resolution No. F.6/2016-SCA(I) dated 23rd September, 2016 decided that till a final decision on Allowances is taken based on the recommendations of the said Committee, all Allowances will continue to be paid to Supreme Court Officers and Employees at existing rates in existing pay structure, as if the pay had not been revised with effect from 1st day of January, 2016.

4. The Chief Justice of India, after consideration, has decided to accept the recommendations of the Commission on allowances with certain modifications as approved by the Government of India as specified in the Annexure to this Resolution.

6. In respect of Washing Allowance which has since been abolished and subsumed in a newly proposed Dress Allowance, Department of Expenditure has advised that Dress Allowance be paid @ Rs.5000/- p.a. and Rs.10000/- p.a. to class III and IV and higher level officers respectively. On direction, the matter is remitted back to Government for reconsideration and deferred till the decision on Judicial side (I.A. No. 19 of 2016 in WP(C) No.801/1986 pending before Supreme Court).

7. The revised rates of allowances shall be admissible with effect from the 1st July, 2017.

By Order and under the authority of Chief Justice of India