You are here: Home / DOP Orders / Once a poster boy of Bengaluru Postmen 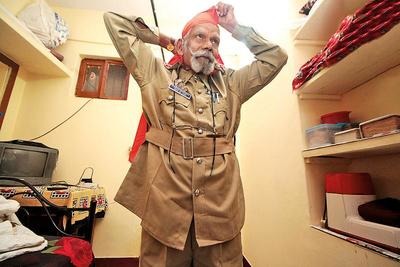 He owns no house, no fat bank balance. The octogenarian’s only possession is an old iron trunk in which he keeps something very precious – his khaki uniform. G Victor Dhanaraj was no ordinary postman in his heyday. One of the first things that Charles Lobo, chief post master general of Karnataka Circle, did after taking charge was to track down Dhanaraj from his pension records and meet him. “He was the face our department then. I was curious to know how he was doing,” says the postal chief.

Old-time Bengalureans might remember newspapers lauding Dhanaraj as ‘Bangalore’s well-known postman’ in the 80s and the 90s. What set him apart was his trademark British-era uniform accompanied by a bright red bandana and a big moustache that made him a familiar face when the tech city was a tiny town.

A postman in Bengaluru for 35 years, Dhanaraj is 83 now but his love for his livery and his pride for the work he did hasn’t faded a bit. The ex-postman still maintains his uniform, dry-cleans it monthly and takes it out every week to fondly remember his

career in the Indian postal department. For this interview at his tiny Lingarajapuram rented house, the frail former mailman was ready in his beloved uniform with large pockets and metal buttons, bandana and boots .

HARD LABOUR
Born on October 15, 1934 in Coimbatore, Dhanaraj came to Bengaluru as a 13-year-old on the invitation of his elder sister who lived in Shivajinagar. Initially working as an office assistant at a printing press on Residency Road, Dhanaraj became a construction worker at the site of Vidhana Soudha in 1952. “I was part of the team bending iron rods for the structure and I clearly remember the day we erected the stone in front of the building with inscription ‘Government Work is God’s Work’ (sarkarada kelasa devara kelasa),” recalls Dhanaraj on his four-year-stint helping build Karnataka’s iconic structure.

This famous inscription inspired Dhanaraj to pursue a government job. Registration at the Employment Exchange received a response in the form of an appointment at the Bengaluru GPO on Raj Bhavan Road in 1957. Promoted as postman in 1962 with a monthly paycheque of Rs 90, Dhanaraj’s dream turned real.

KHAKI COLOURS
From day one, Dhanaraj was fascinated by his uniform. “I was 17 when we tied the knot and I would often stand awestruck at the way he readied himself for work with his spotless khaki uniform and brightly polished boots. He would leave for work at 6 am and return only at eight in the night,” recalls wife Glory Ruby Lidia.

Most of his colleagues didn’t bother to wear all the elements of the official uniform. While others wore just the plain khakhi uniform with a pair of sandals, Dhanaraj ensured that he had the right badges, a belt and a cap. He gave it a personal twist by adding a bandana and tucking his neatly ironed trousers into his socks.

With the sling bag introduced by the state postal department in the early 70s, this postman turned into the poster boy of the department. And the crowning glory for this well-dressed postman? Modelling for a newspaper advertisement in 1972 as a symbol of trust and service. “It was the time when the department had given us the sling bag to carry letters and I had gone for delivery at a graphic designing firm on MG Road. One of the executives made me pose for a photograph which was later used in a cargo company ad. It became very popular,” recalls Dhanaraj, proudly holding up the framed copy of the old newspaper which has him doing a smart salute.

CITY DELIVERY
Dhanaraj recalls the 60s when MG Road had only nine commercial establishments, including LIC office, Bible House, Higginbothams and Liberty cinemas. It was part of his work to deliver letters, parcels and money orders. “I used to cycle the length and breadth of Bangalore whether it was rain or sunshine and deliver letters especially on bandh days even when there was violence on the road. People were extremely sweet and would let me go only after a snack or meal or a cup of tea,” he says.

Owing to his fame, diligence and sincerity at work, Dhanaraj was selected for the prestigious Meghdoot award for being India’s best postman in 1988. “Meghdoot award is a unique honour given to the very best in India Post and postman Victor was the perfect winner as the people of Bengaluru overwhelmingly vouched for his good work. With his unique red bandana and crisp uniform and shining boots, he was then an iconic figure whom everyone loved in department as well,” adds Lobo.

DREAMING ON
After 35 years, Dhanaraj retired in 1992. Precisely 25 years have passed since and he has faded from the memory of Bengalureans. “Even now in my dreams I see that I’m at work in Bangalore streets delivering letters on my old Eastern Star bicycle but wake up to realise those days are gone,” says the ex-postman, who considers his uniform to be his second skin. His son Deepak recalls the time when the family decided to discard the uniform but Dhanaraj remained adamant and held on to it.

Despite poor health, Dhanaraj remains sharp and recalls names of roads and localities in Bengaluru with ease. “We are now surviving only on his monthly pension which is just enough to take care of his medical bills. His left ear piece has become faulty and we can’t afford a new one,” says wife Lidia when out of Dhanaraj’s earshot.

Regardless of all odds, Dhanaraj remains happy and proud. “I have only one wish now. My postman uniform, which I believe spells discipline and pride, must not die with me but make it to a postal museum for the next generation to see,” he says.